With the COVID-19 outbreaks and severe shutdowns, China’s book market growth rate from January to June plummeted, with all sales channels affected.

“A continuous decline from January”

IIn its assessment of the performance of China’s book publishing market this year from January to June, our Beijing OpenBook associates find a 13.8% decline in market growth rate compared to the same six-month period. last year. This, compared to the first half of 2019, represents a decline of 12.8%.

The culprit, as many international observers expected, was the eruption of outbreaks and spread-mitigation measures in the still-unfolding crisis. coronavirus COVID-19 pandemic. Persistent instability, for example, has pushed the organizers of Shanghai International Children’s Book Fair postponed for the second time this year, first from March to July, then from July to November.

China’s online and physical retail index – which dates back to 1999, when OpenBook began tracking the market – “showed a continuous decline from January,” according to Beijing staff, “and the index rebounded after May when epidemic prevention and control improved.”

These data points have now been reported by head of research Xiaohui Feng to key market players at OpenBook’s annual “Reading X” presentation – this year held solely as an online event, a reflective reflection on the current situation. report by Jason Douglas for the the wall street journal.“China is set to register its weakest growth rate in more than two years,” writes Douglas, “a measure of the costs imposed on the world’s second-largest economy by Beijing’s zero-tolerance approach to COVID.” . It’s particularly tough news for China’s book industry, which is bracing for what many in Shanghai fear will be a second rollout of lockdowns as the BA.5 variant becomes increasingly dominant. More information about this in Report by Christian Shepherd for the Washington Post.

The OpenBook team notes that part of the impact the lockdowns have had on the industry includes supply chain disruptions. “The outbreak in the first half of 2022 not only affected online shopping sales,” the team writes, “but also had a greater impact on logistics and warehousing, which also dealt a blow to online sales channels highly dependent on logistics.” 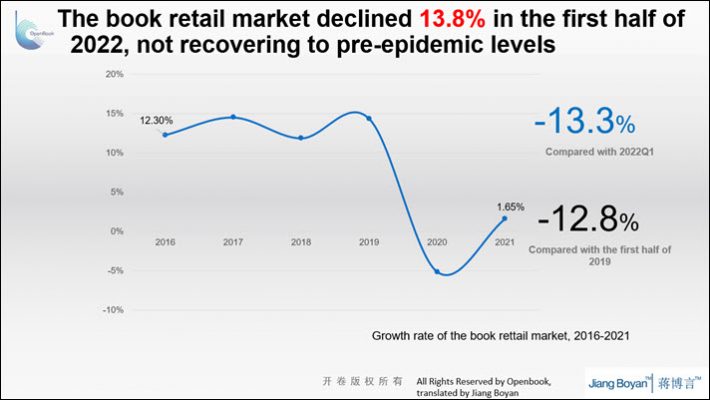 In terms of physical retail, Chinese bookstores recorded a 51.8% decline compared to the first half of 2019, and this decline of 39.7% compared to January to June 2021.

What is increasing, however, in 2021 is the share of online retail activity, which reaches nearly 80% of the overall market. OpenBook examines the three-part structure of digital retail: e-commerce platforms, short-video e-commerce, and other e-commerce options. Despite the buzz around short-form video marketing, like in TikTok, OpenBook sees more traditional platforms as the primary e-commerce retail channels, not least because of their large inventories.

Promotions were an important part of the success that could be managed in digital retail. The annual “618” promotions in mid-June opened early, in May, researchers tell us, and the discounts offered were particularly aggressive across short-video retail channels, reaching deals of 62% in some cases. . On more traditional platforms, discounts were as high as 46%. These figures can be compared to the prices of physical bookstores which offered only 10% discounts.

Even at the highest discount ranges, OpenBook warns that drastically reducing prices to top competitors is of course not a long-term strategy. “A discount contest,” our associates politely said, “does not bring sustainability.”

Among these sales channels and their many discounts, sales have been concentrated around sectors and content genres. 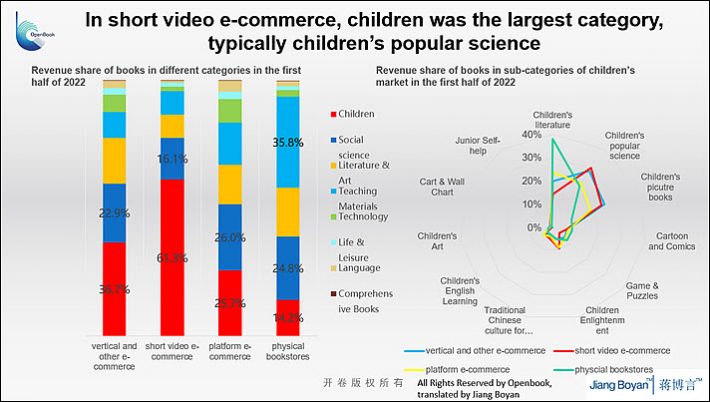 An interesting couple of parallels can be found in how the first and last lists have evolved over the first six months of this year in China.

And if we look at the titles that sold between January and June in a total of 1,000 units and more:

So we see from this that despite the robust performance of short video channels, the breadth of inventory they offered in the first half of the year was quite narrow compared to other channels.

There are more nuances to be worked out in how short video e-commerce sales work in the Chinese market, and we’ll come back to that for more coverage. Thanks, as always, for Jiang Boyan’s translation and coordination assistance. 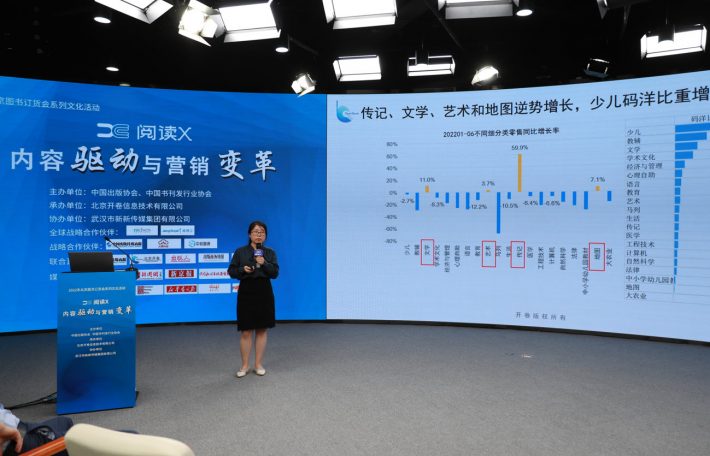 OpenBook Research Director Xiaohui Feng reports the data points from the first half of 2022 in a digitally produced program for this year’s Reading X event. Image: OpenBook

Learn more about the COVID-19 coronavirus pandemic and its impact on international book publishing is here.