While higher interest rates should support the expansion of US banks’ net interest margins, the drastic rise in rates since the end of the first quarter will also have a negative impact on the value of most bonds held by the institutions. Unrealized losses in the second quarter will likely increase from the first quarter and negatively impact tangible book value.

Bank bond holdings have grown significantly since the start of the pandemic, but many banks have been reluctant to deploy too much or at least buy longer-dated securities, fearing pressure from rising rates. In the first quarter of 2022, deposit growth outpaced loan growth by more than $4.5 trillion since the end of 2019. Banks put much of that money to work on the bond market, but were reluctant to deploy too much cash or reach very far up the yield curve as they expected interest rates to rise.

As interest rates rise, the values ​​of many of the bonds held by banks tend to come under pressure. All banks must mark bonds held in available-for-sale portfolios, or AFS, on a quarterly basis. These portfolios continue to hold the bonds held by the majority of banks, although most of the recent expansion has occurred in held-to-maturity, or HTM, portfolios that are not marked on a quarterly basis. Changes in the value of available-for-sale portfolios affect accumulated other comprehensive income, or AOCI, and affect common tangible equity.

Rates have risen significantly since the end of the first quarter as high inflation persisted and the Federal Reserve announced its intention to tighten monetary policy more aggressively. Yields on 2-year, 3-year and 5-year Treasury bills have all risen more than 100 basis points since the end of the first quarter. These moves are expected to put even greater pressure on the valuations of bank bond portfolios, which could limit future growth in tangible book value.

Many banks have already reported tangible book value pressures in the first quarter, as the value of their bond portfolios plunged during the period. In the first quarter, institutions — including U.S. commercial banks, thrifts and savings and loan associations that file GAAP financial statements — reported $64.14 billion in unrealized losses in their portfolios AFS, down substantially from $4.90 billion in unrealized gains in the prior quarter and down to $17.04. billion in the period a year ago. These institutions saw their tangible book value overall rise 0.7% from year-ago levels, despite more than $41 billion in profits during the period.

Some banks noted a few weeks ago that the negative impact of AOCI might not be as significant in the second quarter. Fifth Third Bancorp, for example, told an investor conference in early June that the impact of AOCI through the end of May would be about “half the impact of the first quarter.” However, since the end of May, yields on 2-year, 3-year and 5-year Treasury bills have all increased by more than 35 basis points. 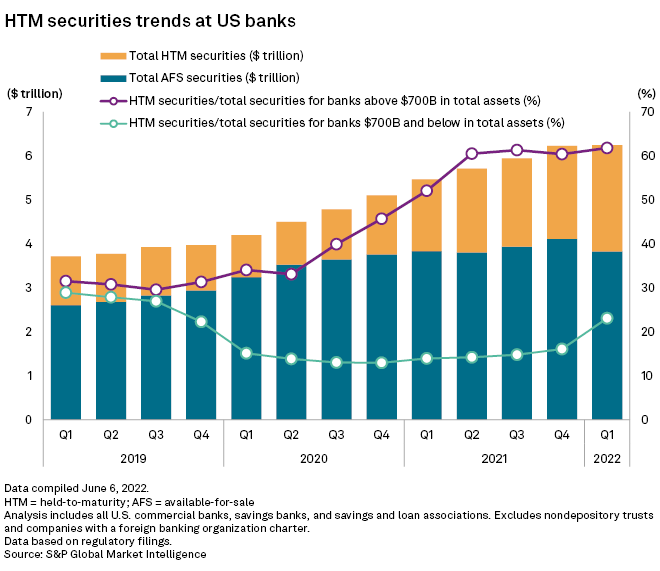 Some banks, particularly the nation’s largest institutions, have sought to insulate much of their securities portfolios from market fluctuations by placing bonds in their held-to-maturity, or HTM, portfolios. For banks with more than $700 billion in assets, the AOCI changes would impact regulatory capital in addition to tangible book value.

The big banks classified as US Global Systemically Important Bank, or GSIB, holding companies — those holding more than $700 billion in assets — have placed nearly 62% of their bond portfolios in HTM portfolios.

The growth in large banks’ HTM portfolios has occurred as these institutions’ securities portfolios have exploded during the coronavirus pandemic, growing by more than 50% since the end of the first quarter of 2020.

Meanwhile, HTM holdings of banks with less than $700 billion in assets increased more recently to 23.1% of total holdings in the first quarter, from 16.1% in the previous quarter and 14.0 % one year ago.

Across the banking sector, US Treasury securities and securities issued by government-sponsored enterprises accounted for nearly two-thirds of HTM securities held by banks at the end of the first quarter. 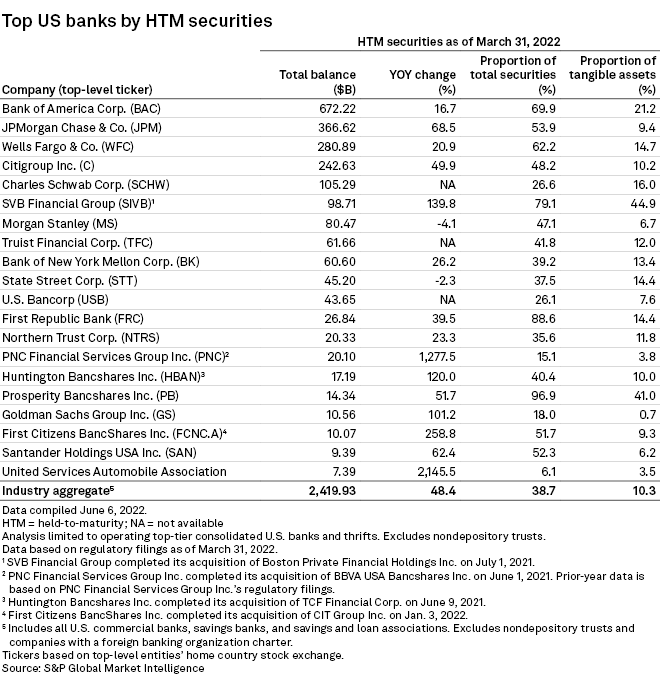 There are several ways to find valuable stocks. Among these, the most popular are Price / Earnings Ratio (P / E) and Price / Sales Ratio (P / S). However, investors often overlook the price-to-book ratio (P / E ratio), which, although used less often, is an easy-to-use valuation tool for identifying low-priced stocks with […]